...this is important. Stick a pin in it.

Remo had these nice placards all over the airplane. Professionally done. Very well looking. He probably ordered them somewhere, or used a technique I am not aware of.

These placards are mostly glued on, and do not come off.

How do I know?

Well, I needed to remove one, in the side conduit. Here it is,.. 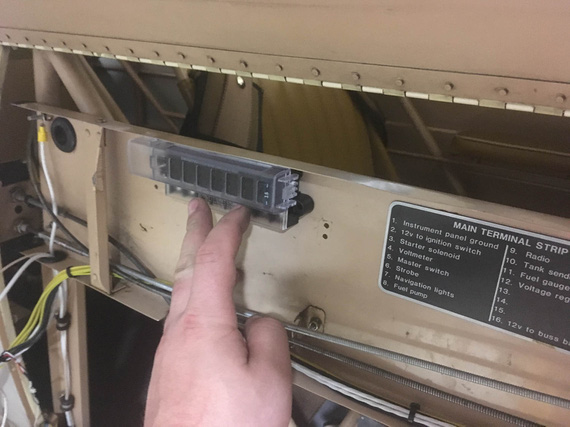 Why am I telling you this?

You have probably figured by now that I have a taste for misery, and for ranting about how miserable that or this was :). If you read a few notes in this Dear Diary, you will notice a trend - that I tend to come up with ways of making myself aggravated, very consistently and reliably.

Well, this time it was the "anti-rotation" holes for switches in the panel; and the plan was to drill them from the back side of the panel not quite all the way thru (yay, no access and contortionism again!)

Every switch, circuit breaker, and certainly, a dimmer, comes with a "keyed" washer to prevent it's rotation. That means you're drilling two holes - one for the appliance (switch, or whatever), and the other for the little tab that's on the washer.

Picture explains this better. Here is a little hole template I quickly drew in Solidworks, properly dimensioned, with washers from (left to right) the circuit breaker, switch, and the dimmer. 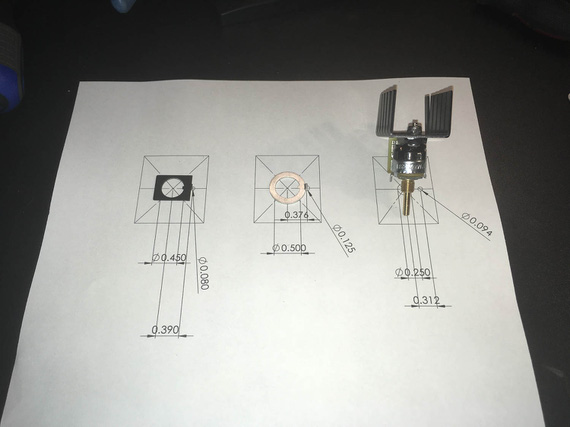 See, Remo didn't have those "secondary" holes on the panel - so I had to drill them (especially for the dimmer).

But wait, you ask. If you drill holes, that will be ugly - a hole next to every switch?

Yup. Aha. Agreed! Though the nuts are supposed to cover them, they, I'm pretty sure, from my testing at least, wouldn't have...

No problem! Remo made the panel from 1/8" thick aluminum, and I needed maybe half that much for the tabs to go in. So the plan was to very carefully drill them just deep enough to house the tabs.

Made me a nice little set of templates... 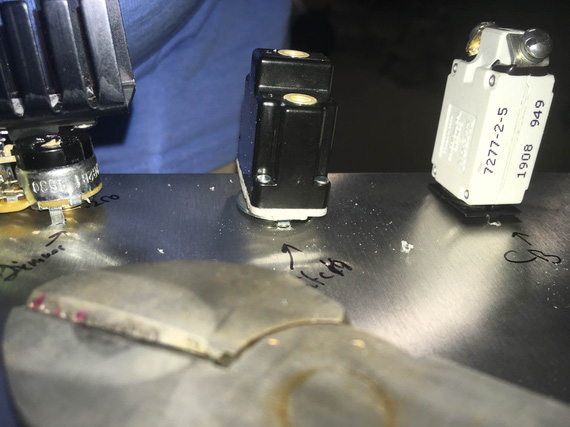 Templates in the making

...out of a small piece of aluminum, drilled holes using my paper template, and cut them up... 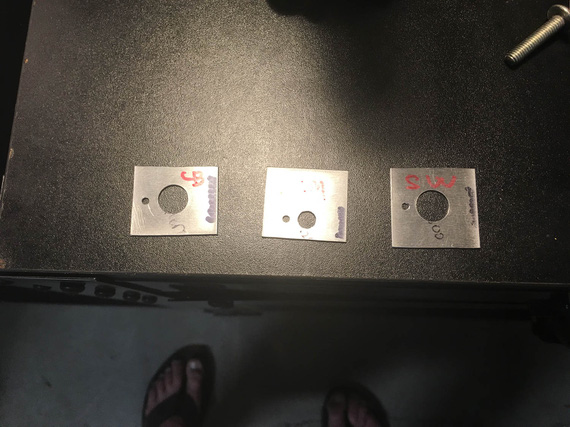 ...and cleaned up the holes and edges.

The plan was, to put a template like a "washer" around a switch/CB/..., and center punch the secondary, small, hole, thru it. Then, I'll have punch marks to drill, and will have to either get to them from the side of the plane, or, more likely, from the back of the panel while sitting in the seat and not seeing where they are while drilling, using a mirror to position the drill first.

Like I said, I have a taste for misery.

So there we went, punching the back side. 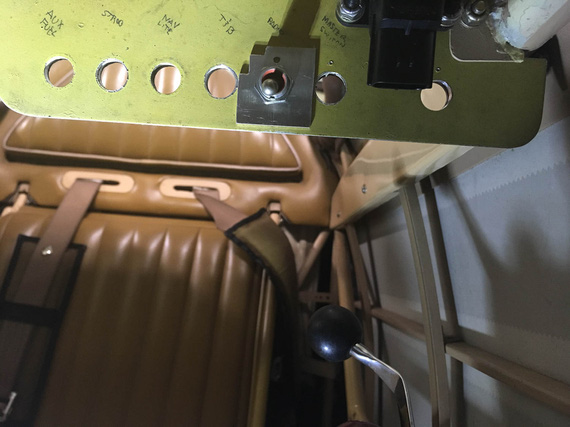 Center-punching on the back side of the panel

Cling! Ding! Ding dang dong.. it sounded like a chunk of metal just fell off the plane and dropped on the cockpit floor.

I crawled out from behind the panel and looked into the cockpit.

On the floor, looking at me, and almost smiling, was... 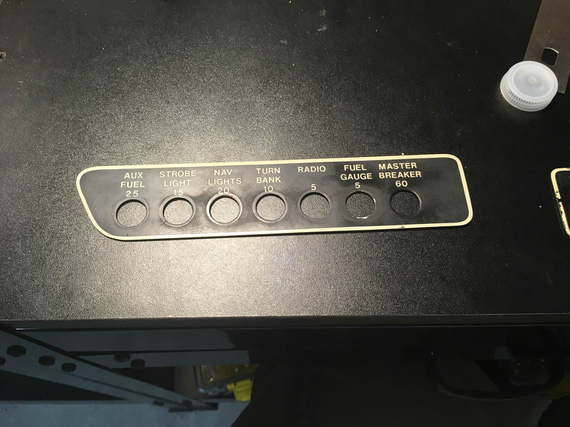 ...this. Remo's placard that went around the switches. Like so: 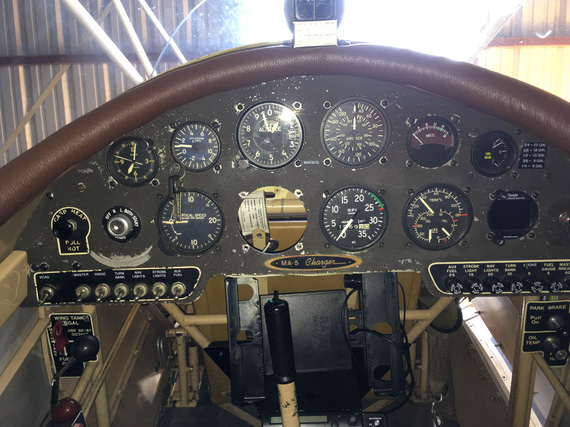 Wait, wait wait wait. It came off. But it will be held back by the switches' nuts when the switches are in. And.. cover the holes! That means, I don't need to drill the holes from the back side and worry about punching thru (or not going deep enough) - I can comfortably sit in the cockpit and drill them from the front! All the way thru! The placard will cover them! In my search for misery, did I luck out?! :)

In retrospect, this (and the opposite side's) placard were probably not glued. No need - switches' nuts hold them just fine.

They were stuck because Remo probably installed them on top of the paint that didn't fully cure - and it just stuck to the backside of placards over the years, under the pressure from switches' nuts.

I stuck my nail under the opposite side placard, and it came off with a little force.

Well, it was smooth sailing from there... 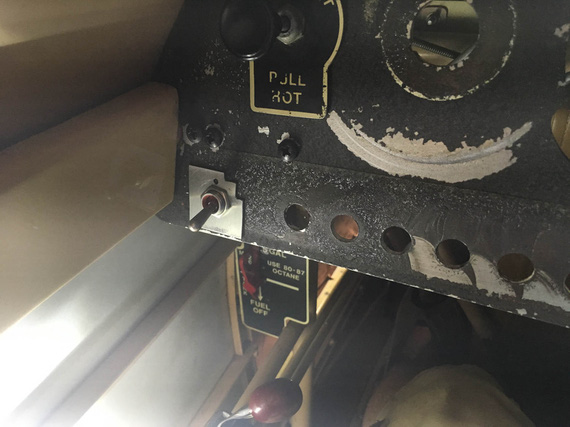 Marking from the front

... relatively speaking, of course. I still had to hold up the vacuum with my knee, and maneuver the sharp drill, making sure to be extra careful not to poke it into anything important (like, fabric on the sides). 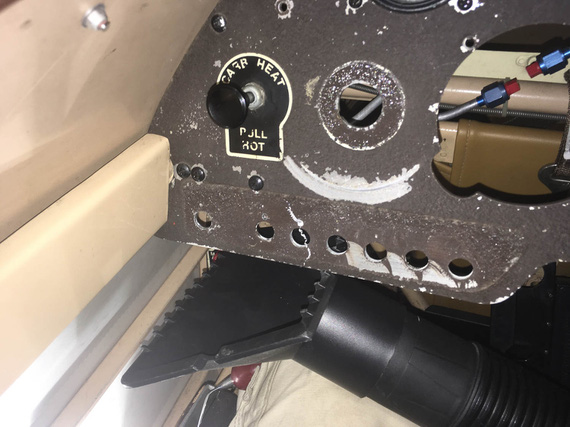 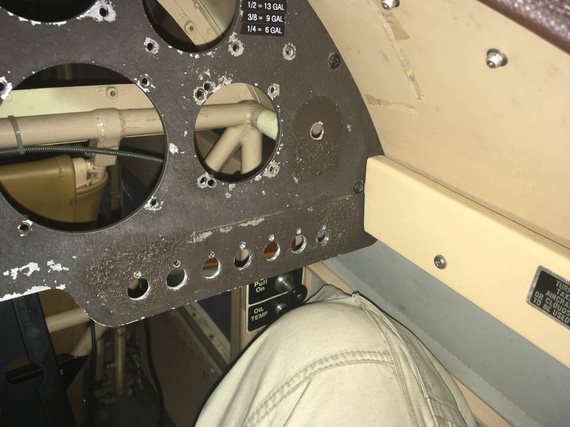 The ones on the corners were annoying; but I already had the drill bit installed into one of my hex drill adapters - so a 90 degree adapter was not an issue. Didn't even need an angle drill. 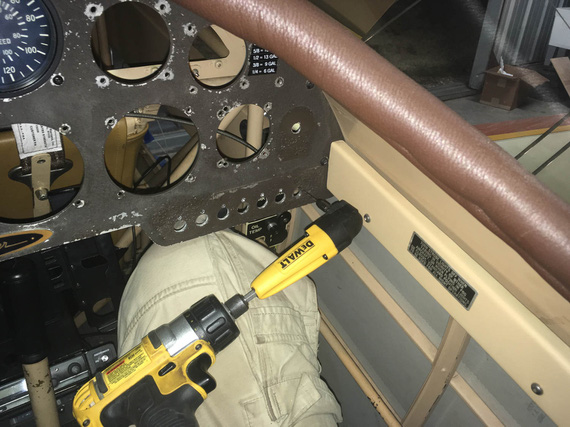 Angle adapter for the side hole

That sucker has 1/4" diameter threads; and all the holes I have in the panel are 1/2... Without some serious bushings, or other mods, or a new hole.. ugh. 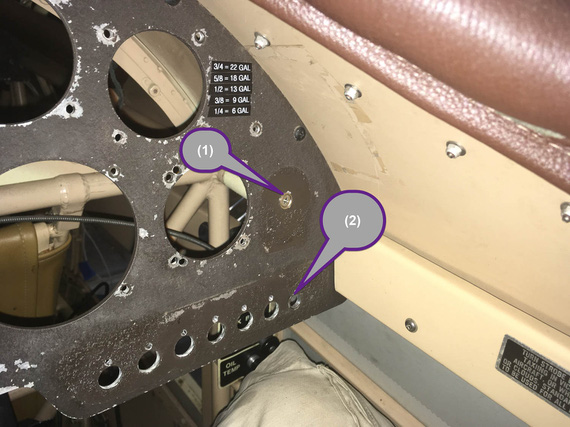 I was hoping to stick it into the old "Master Circuit Breaker" hole (marked (2) above), but it was waaaay too big.

Yep. Good luck, buddy. That was an even bigger hole that was plugged with a #8 screw in a countersunk finishing washer... hmmm... maybe that will work out for the pot too?

You know, drilling a #10 countersunk washer to have a 1/4" hole in it is... hard? Annoying? You can't really grip it in any manner without damaging it, you can't hold it in your fingers... I think I lucked out on my third try, with combination of a Unibit and light clamping of that washer in a vice.

With that re-drilled countersunk washer, the pot mounts just fine in hole #2. And #1 got plugged back :).

Well, after all that excitement compass mount was almost anti climactic. I toyed with the idea of putting it into the panel (and relocating G-meter into a new hole I'd cut around where the ignition switch was - see, after having failed relocating Hobbs there, the idea of still making a bigger hole in the panel keeps nagging me :).

No good. When that much down, too much steel around it confuses the compass to the tune of about 30 degrees... No need to add extra problems in already a magnetically problematic plane.

So, top it was to be. The windshield will get in the way, but I really, really didn't want to take it off (~20 #6 screws and nuts in a tight spot is no fun).

Eyeballed the bracket alignment with the fuselage centerline and put it in the right spot...

Damn! Sharpie's too tall to get in there to mark the holes vertically. "Angle Sharpie Adapter"... hmm.. 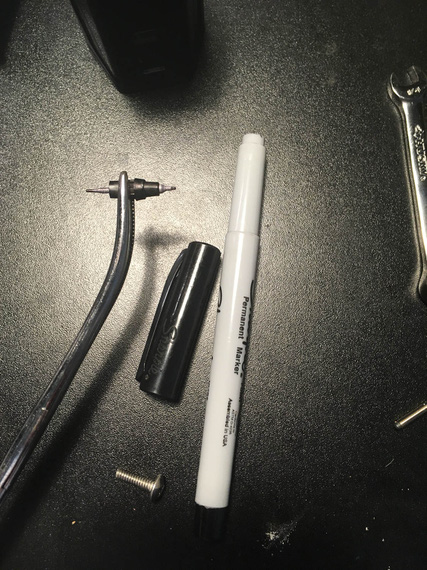 A bit of disassembly and forceps do the trick ;). 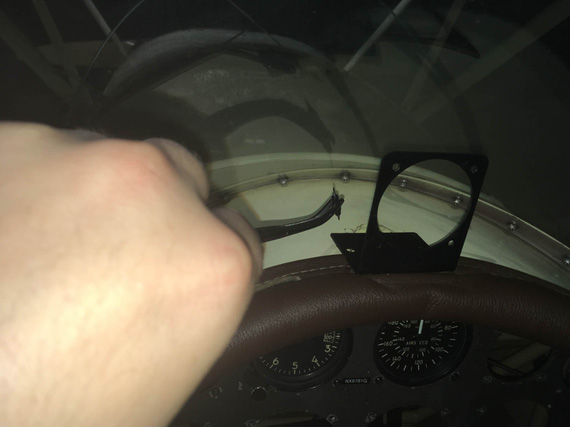 Holes punched and drilled, I added a bit of rubber foam under a portion of the mount to "eat up" uneven surface created by combing... 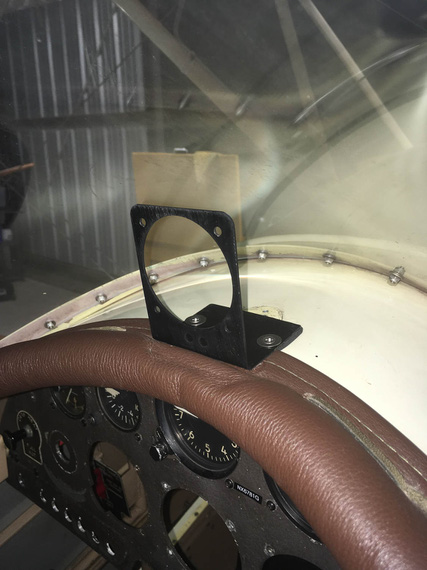 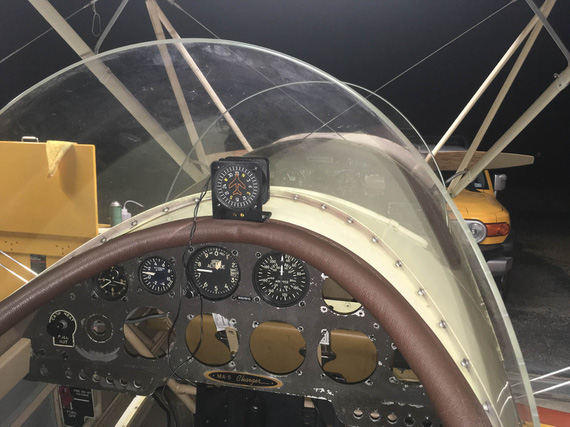 Side note to attentive folks: yes, I know I need brass hardware - those CSK washers and SS CSK screws are temp fasteners I used to test positioning. It will be brass, I promise :). 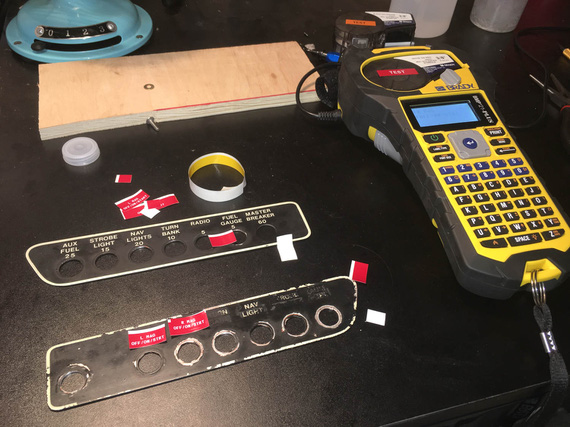 Some pilots will make an emergency out of a bad magneto check. Others, upon losing a wing, will ask for a lower altitude.