So this was quite an effort - not because it was a sophisticated design, but rather because it took quite a bit of time to lay out in a reasonable fashion...

Oh, and also, somewhere in between I had a break for Oshkosh and a work trip :).

I decided to post this in a form of design notes, so that I can go around asking people what they think...

I have posted it in PDF over here.

Wire length / drop / load calculations are in the Excel spreadhseet over here.

Review Items and Commentary on Specifics

My current take on my Starter and Mags circuitry is this:

This is a deviation from Z-11, with both switches having to be in the momentary up position for starter to engage. I like this better for two reasons:

I need to test the ergonomics of pressing up a couple switches together. If I don't like it, another alternative would be to replace the "Right Mag" switch circuitry from -5 to -1: making the top position on it non-momentary (as noted on the diagram). This will reduce the "user-friendliness" but will still keep the explicitness, especially with my using pull-to-unlock switches from Honeywell.

The Charging and Buss circuitry excerpt below:

Note that the buss feeder wire is protected by a slow-burn 35A current limiter. In Z-11, that wire is not protected at all. My reasoning for this decision is that this wire is relatively long on my plane (around 4 feet), since fuse block is near the rear cockpit. I wanted to protect it.

One area of concern here is that in the event of alternator short, the Ammeter Shunt will be a part of the alternator circuit that will see a lot of current while the 40A slow burn opens up. My gutfeel says it should be able to handle it, but I am not sure. At any rate, figure Z-11 has the same setup with shunt on the alternator's B-Lead.

LR3C Voltage Regulator needs a separate "voltage sense" wire that one would normally connect to the main buss. Since the regulator in my case is closer to the firewall than to the buss (fuse) block, I am connecting it to the main battery circuitry (jumper wire between Starter and Master contactors). This is somewhat a shorter run and seems that it will be more logical to measure as close to the battery as possible (especially since I'm saving on wire lengths this way). Seems sensible to me.

The sense wire will be 20 AWG, about 3' long, and connected via 24 AWG fuselink.

I copied the AeroElectric's figure Z-11 wire gauges here. In Z-11, everything upstream of Breaker is 18 AWG, and everything downstream is 20 AWG, but it's not explained why.

Is this driven by a requirement to ensure that fuselink survives the short in the circuit in case of crowbaring, and the breaker pops first, w/o endangering the fuselink much (18 AWG allows for 22 AWG fuselink instead of 24 AWG)?

Here's a relative diagram of components location, that is necessary for explaining what Main Connector is. Click it for larger version. 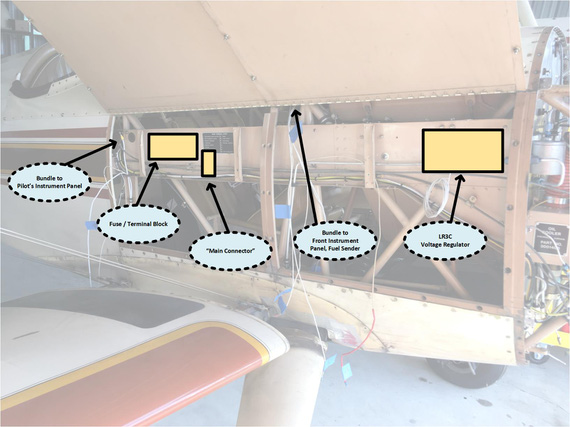 Note that logically, the way one would wire this airplane would be to pre-wire switches and other items that go into the pilot's (back) instrument panel with long pigtails, then install the switches, and tie down wiring behind the panel. Then, the pigtails can be connected to fuse block and loads.

Some of the load wires already exist (lighting for example), and they will have to be spliced to wires coming from switches.

This serves a couple purposes:

For now, I am thinking about using Molex 0.093 pins in two housings (I have 13 circuits total to connect via this thing, and want to have room for further expansion). I would love suggestions here. One of the requirements is that it should be easily workable with a multimeter for tracing / testing purposes (I technically could've used D-Sub here , but am not due to this precise reason).

Separate Switch for Turn and Bank

Yes, it's weird to have that. The original electrical had it. I guess, the logic was to be able to shed half an amp of unnecessary load in the event of alternator failure, or it was just done for no good reason.

It's a Westach gauge that feeds off of a magneto P-Lead. No separate power going to it.

Westach asks for a 1/4 A inline fuse. But why? Seems unnecessary (we don't need to fuse P-Leads).

Wire going to this tach in my opinion need to be shielded P-Lead wire. Not sure if I'm correct here.

I need to tie into one of the P-Leads. I have three options:

At magneto: I will effectively have two P-Leads coming off of one of them. I have Bendix mags, and connectors on those might make the whole hookup look ugly. Adds extra wire.

At mag switch in the rear panel: just adds extra ~4 feet of wire for no reason.

Y-Split the P-lead as it goes along the fuselage: this seems the most optimal wire-management wise, but I am not sure if splicing into a P-lead is kosher. I don't see any good reasons why that would be bad, but I don't know everything. This will likely be a soldered splice unless I find or someone suggests something better. This is my solution of choice at the moment.

I am on the fence on this one. On one hand, I can add a nice LED strip light and dimmer to light the panel up.

On the other hand, this is extra weight, and "this is a biplane! you won't fly it at night!" vs. "well what if you find yourself out late" keeps nagging me. Note: I do not have a landing light (though in a biplane... that's somewhat a non-necessity ;) ).

I am leaning towards doing it, because doing it now will be easy, and I will have the option to see my gauges at night, even if that Dark and Stormy Night will be a result of bad planning rather than an intentional thing.

Radio stack was wired via the "Radio Master" switch prior. I was initially going to run separate power feeds to each of the things in the radio stack, but to get to it, I'll need to pull the wings off (yeah...). It's in between pilot's legs attached to the bottom of the cockpit.

So, the feeder is staying. The stack has been wired by previous owner recently, and isn't wired badly - with individual fuses for each radio, and a 10 AWG feeder to it and ground "return" from it.

I'm just putting this "hose" on a 30A fuse, which is more than enough to protect the wire and support all the loads from that stack.

Strobe and Nav on the Same Circuit

I am replacing (TailNav, WingNav) + (old heavy strobe on belly) with SkyBeacon and SkySensor on wingtips and nav/strobe on the tail, but I don't have enough wiring in the fuselage and wings to have a separate circuit for strobes. I do not plan to fly IFR (biplane!) so "strobes in the clouds" is not really an issue. When I will have the rag off the airplane, I will add a separate switching circuit for just the strobes.

Flying is the perfect vocation for a man who wants to feel like a boy, but not for one who still is.