Well, since it seems now that my Hangar will become my shop for a while with me doing the electrical rebuild on the Charger, I decided to set myself up in it. I am still rebuilding the main shop at the house (reminder: need to write up a couple notes on that), so the only place I have to work on the plane is in the hangar - and frankly, I probably wouldn't have dragged the whole thing over to the house anyway just for an electrical rebuild... though it is getting hot, and being in a tin can of a hangar when it's 100 degrees outside is not.. pleasant, shall we say.

At any rate, the Hangar is now to be officially known as The Dream Shop, Georgetown Annex!

Not much to tell - but much to show here.

I didn't have anything in the hangar besides a couple of old bookshelves, a couple of small tables, a few filing cabinets I have inherited from my good friend Pete, and a cart. Not very nicely set up for working on airplanes, and everything was overflowing with parts, tools, and hardware even after just a bit of disassembly I have done for the annual.

I needed a lot of shelf space, and a lot of bench space.

I decided to take an easy route this time, and instead of building everything, just bought a bunch of shelves at Costco, and benches and a tool cart at ... Harbor Freight. Yep, I know. Throw a rotten egg in my face next time you see me. 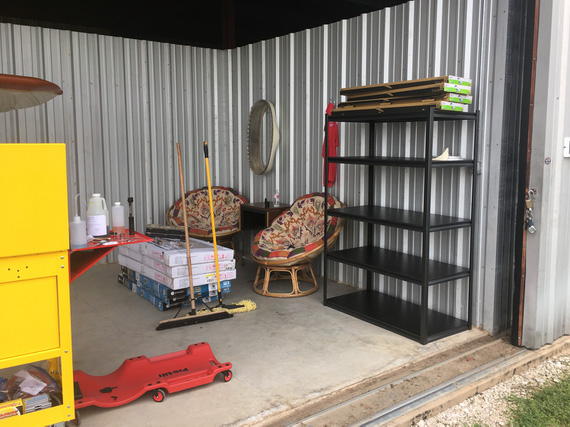 I work evenings a lot, and the only light source there was there was a four T8 tube fixture in the back of the hangar. But the most interesting stuff is on the front of it (engine, yep :) ). So I added some lights around the front. 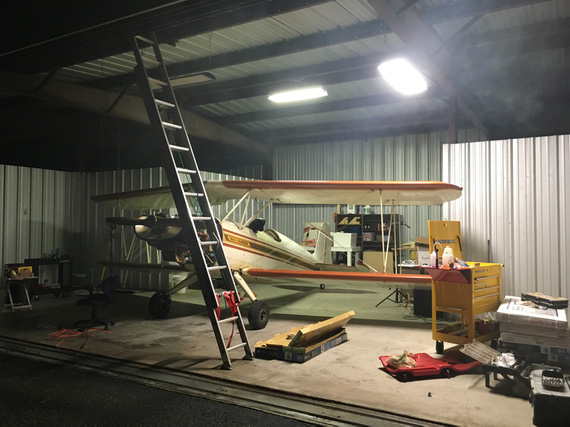 Next, came the benches from Harbor Freight. Don't buy them. They're built like crap, and, frankly, I think I could've built better ones out of 2x4s in about the same amount of time it took me to put these together... But hey, I already bought them, and disassembling the first one (I got three total) rather than putting the other two together... I didn't want to... 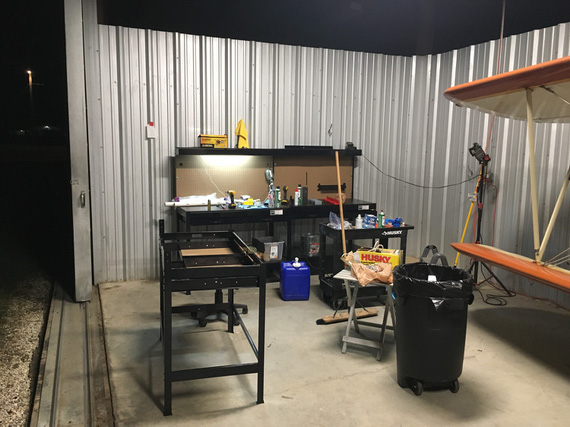 You might notice the pegboard at the back "wall" of those benches. Well, they attach it every about 12 inches around the perimeter with machine screws and nuts. Guess what happened to the first pegboard after a humidity cycled high, and then low? Yep; it all warped!

Ended up resorting to straightening it out with shelves that acted as "stiffeners", and putting the warped pegboard bench as far away from the "main" bench as possible).

On the other two I actually made the pegboard "floating" - re-drilled the mounting holes to be large, and used large washers and just enough small washers underneath to MacGyver me a "bushing". That worked, and the other two benches' pegboard is straight after quite a few large humidity changes now.

And then, the sink.

I long had a large 7 gallon jug with a tap. When I was doing a lot of work, I'd drag it out of the hangar, put it on a small folding table, and use it to wash my hands. Very nice to be able to do that when your hands are covered in oil and crud, and you need to climb into the airplane or grab something generally clean. I also like clean hands when doing detail work like soldering, painting, etc. 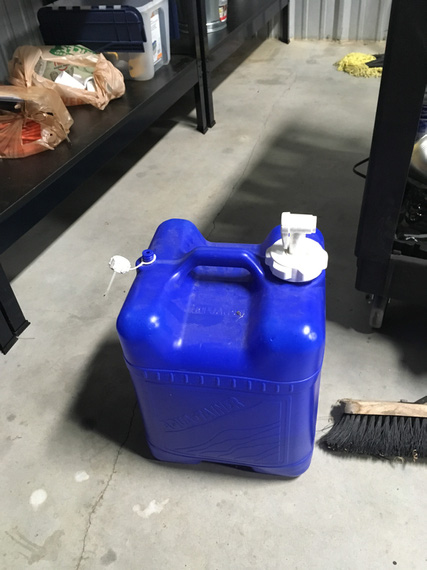 But dragging out a 7 gallon jug every time I got into the hangar got very old very fast, and I ended up typically resorting to rags and not so clean hands, or "washing" them with mineral spirits... ugh. 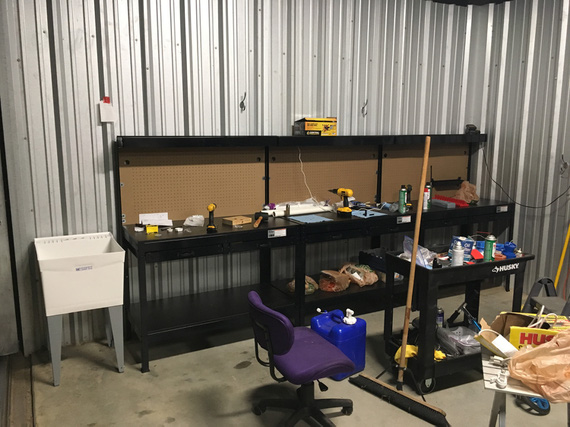 But a sink needs a drain! 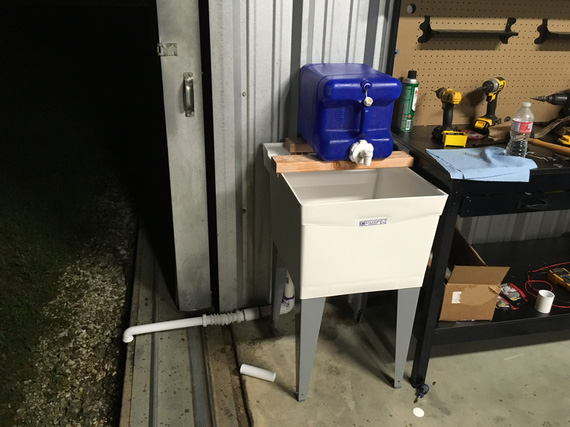 This came out very nice, and I love that I can now just wash my hands whenever, no jug dragging required.

The best part? The hangar door slides, so I can have it closed and then slide it a bit past it's "closed" position, so that there's a gap between the hangar divider wall and the outside for the drain to be put out.

But how do I close the door? 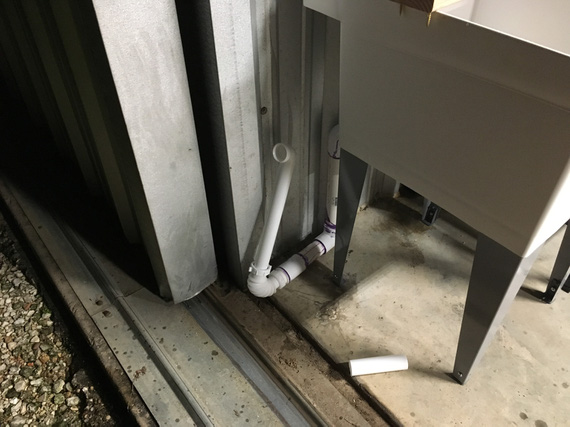 Do I need a Complex endorsement to operate in my hangar now? ;)

Before you wire your plane, wire your hangar, says a proverb. Or something like that.

Well, my hangar floods. And it's not my hangar, so I can't quite make holes in the walls and run wiring and conduit. And I only have one outlet. Yep.

So it was all to be a bunch of extension cords, making sure that all connections are suspended a few inches above the floor, hooked to something (previous tenant of my hangar had some holes in the walls drilled, so I reused his, or hooked them up to legs of whatever was there, etc).

I ended up making a bunch of splices on extension cords. Hey, I love soldering! 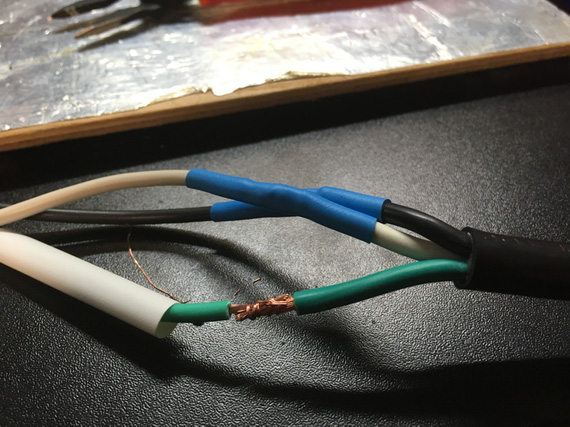 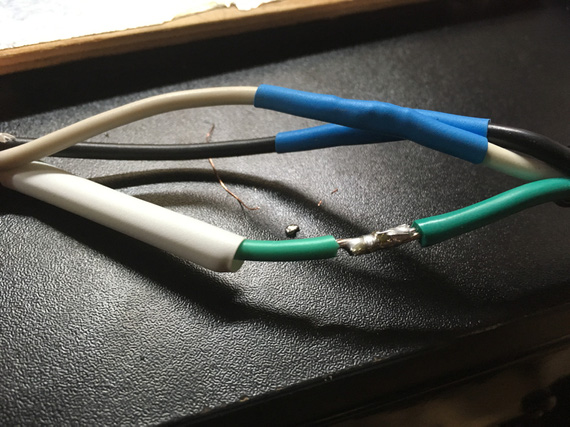 And now, with liquid metal!

I had a compressor. I moved it to the back corner of the hanger, and hooked up a reel in the front, so that I can have my hoses neat... Not much more.

The back wall of the hangar got lined with the big shelves, too... Mostly, to stack the parts I take off the plane and need to keep off.

The first one up is there on the right, near the yellow barrel. 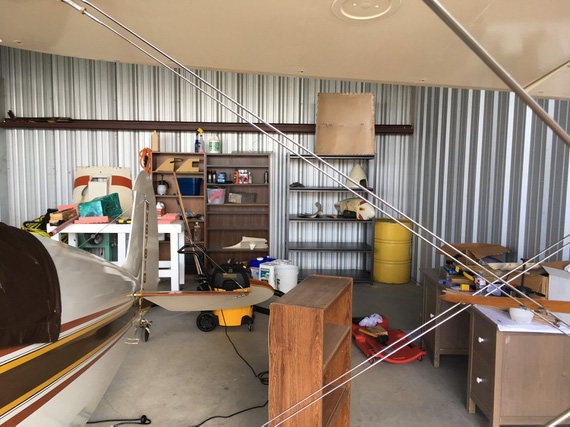 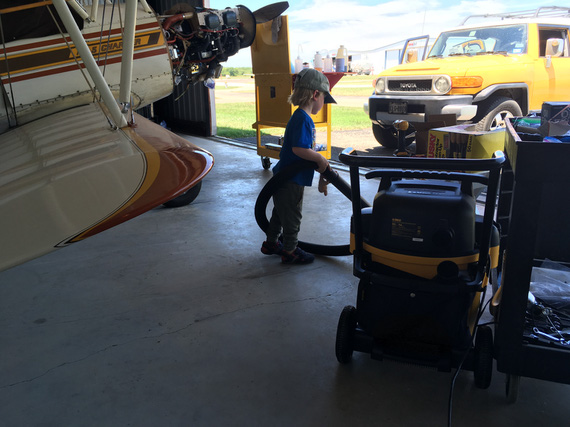 Some child labor might have been involved in cleaning this hangar

... and since the Charger is a Grand Champion, I needed a shrine in the "mancave corner" of the hangar. Every hangar must have a corner with a couch, a fridge and what-not, to relax and ponder and procrastinate. And that's where all the artifacts need to go. 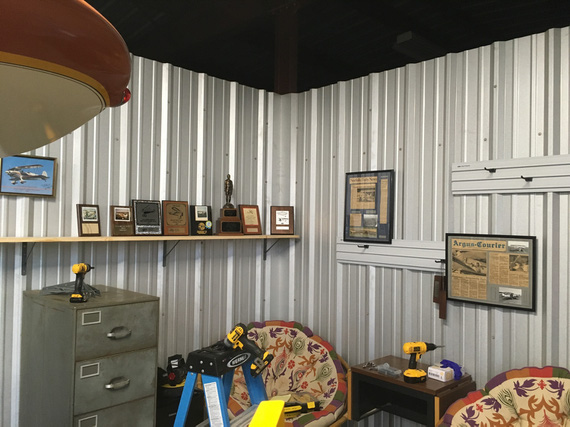 And I didn't drill a single hole! All those rails and shelf are re-using the screws that are holding the hangar walls together :).

I needed at least one good bench for grinders, bandsaw, and aluminum work; and there was a perfect spot for it. Didn't have my wood tools though, so had to use 2x4s straight out of the store... Normally, I mill them down :). 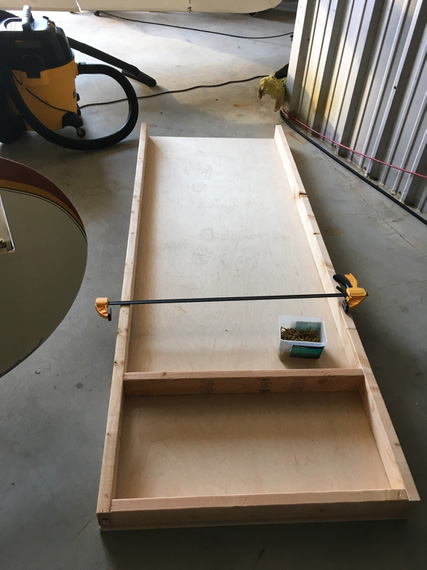 The top and the frame to be 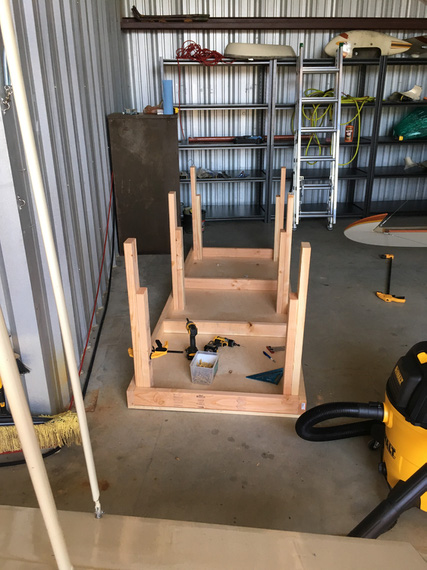 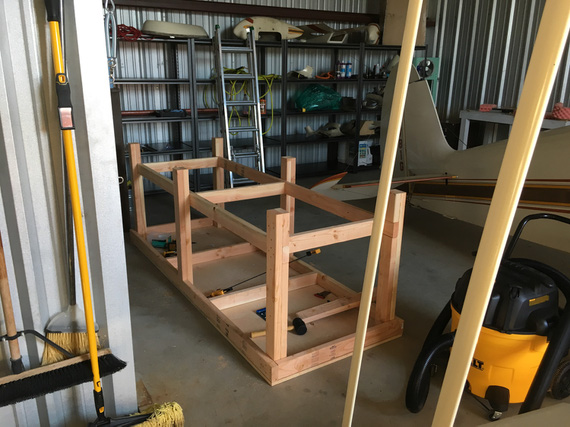 ... and then, you flip it, add the bottom shelf, attach the leg stands, and voila: 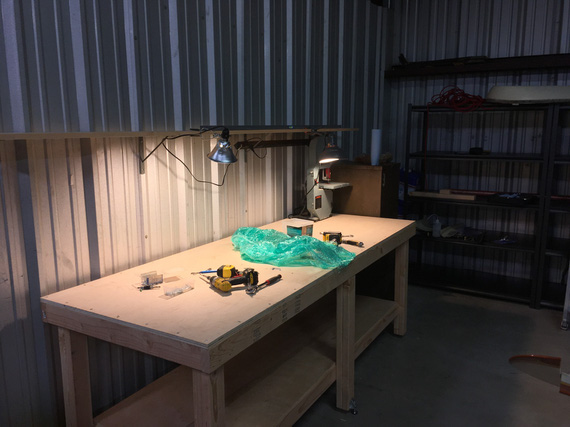 Even though it's not very flat, it's perfectly fine for anything but being a reference flat surface for assemblies... 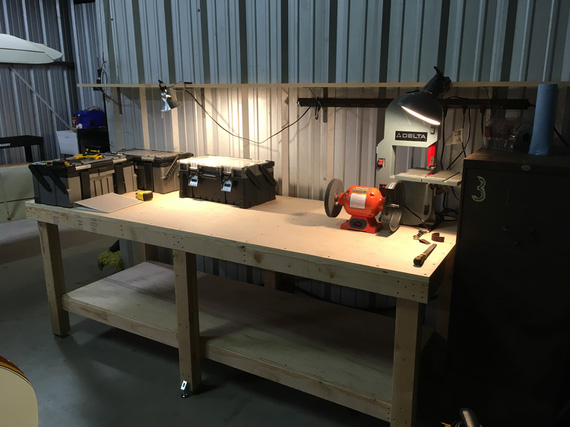 Well, and I guess, that was it. I spent a few more days and evenings cleaning up, and putting everything in place. And I guess, we're due for some "before" and "after" pics :). 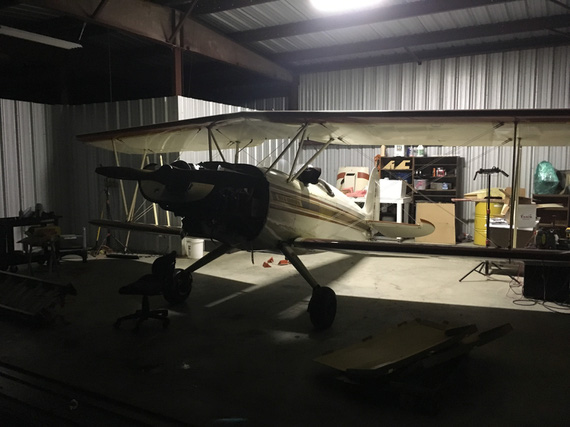 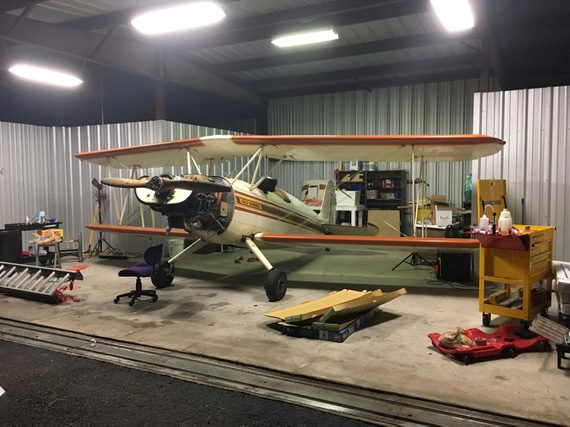 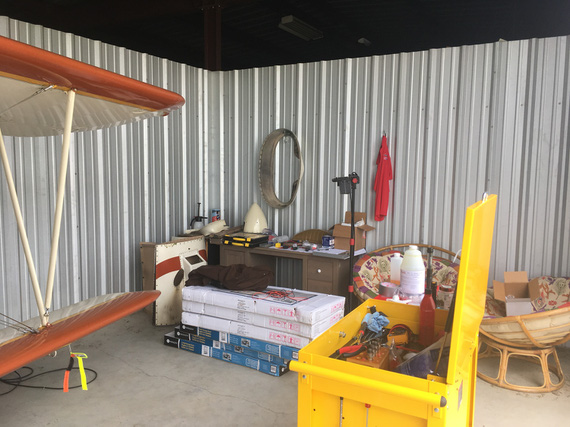 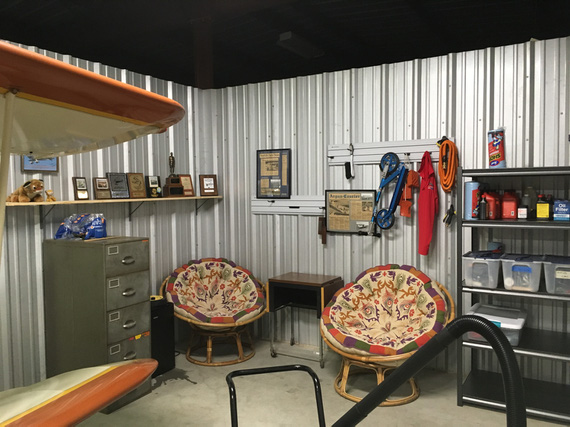 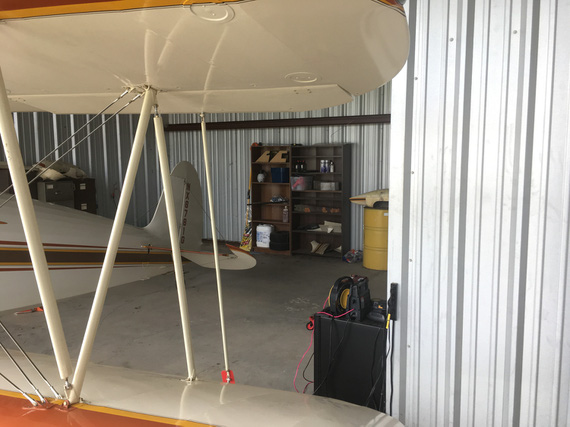 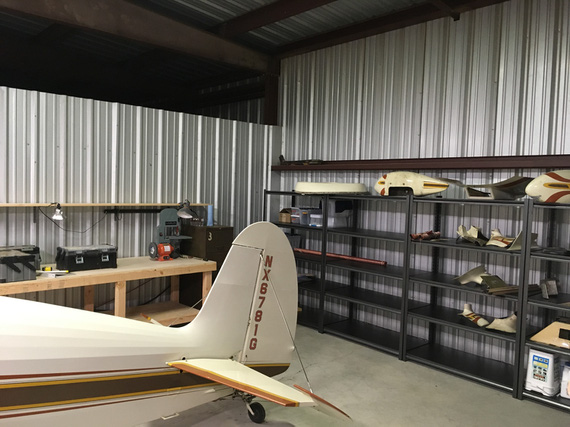 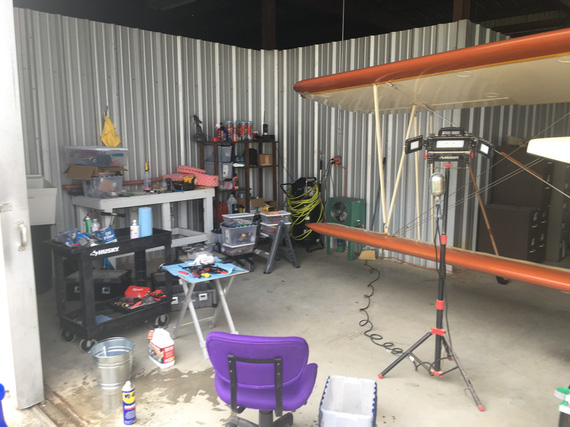 The main work area: before 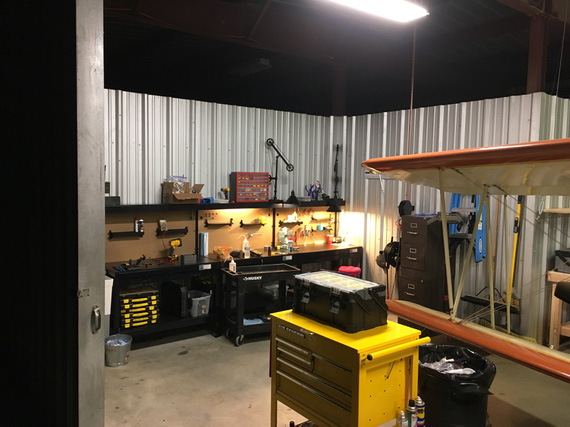 The main work area: after 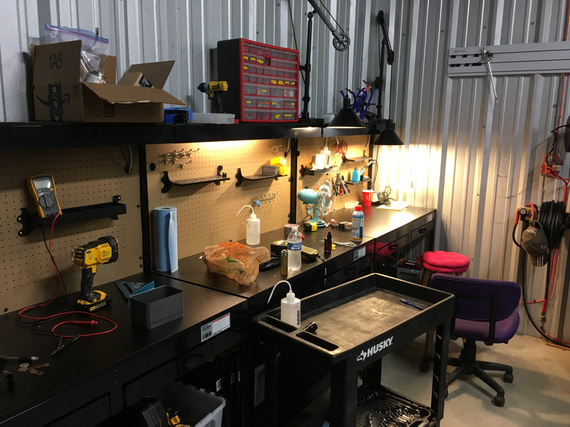 So, there. Took me a month with the breaks for fixing HVAC wiring on a Subaru (funny how that happened in anticipation for rewiring the plane, eh? and I really started to dig Molex connectors doing the fix - but we'll talk about Molex when the time comes), and a bunch of other stuff.

But hey, I can work on things comfortably now. And, wash my hands whenever I want!

The nicer an airplane looks, the better it flies.