This was my second Oshkosh, and the first time I noticed the Biplane Forum's Beer'O'Clock thread.

We had two "events" that year: one in the Vintage at the awesome Piper Pub (yep, the spelling is right - it was a Tri-Pacer with the baggage door that had a beer tap. The guy who owned it claimed he had an STC; but paperwork got soaked in beer and was drying somewhere). We sneaked in a large cooler of Austin sour beer then, hauling it all the way from the opposite end of Camp Scholler. I met Glenn there, and later that night washed out in his camp and was fed with a kick-ass grilled cheese sandwich, and met Judi.

The second "event" was at Glenn's airplane, parked near Homebuilder's HQ. It was a beautiful Marquart Charger, I learned then; a 1987 Golden Lindy recipient, built by Remo Galeazzi in Petaluma, CA.

That biplane was beautiful; just the right curves and not as aggressive as more modern ones like Pitts and Skybolts. It looked straight from the 1930s, with wooden prop tipping the nose. I fell in love with it. 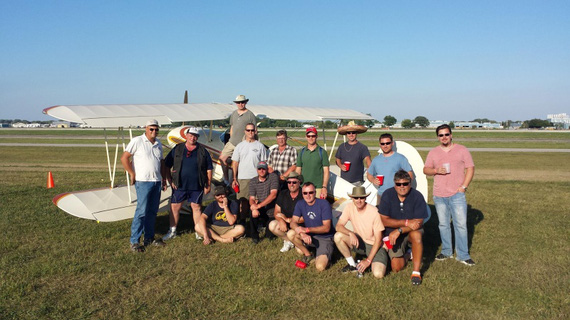 Glenn's Charger became a traditional spot for these beer get-togethers, and we became friends who only met at Oshkosh; but to me it felt like I knew Glenn for my whole life, and 11.5 months between AirVentures felt like hours.

In 2016, I was finally around Chicago where Glenn lived, and he took me out to his home field, Poplar Grove. Man, what an airport! Just the right kind for his plane. We spent a day there, and I think I have seen only one spam can and maybe one RV. The others were a few Cubs, a Twin Beech, a Waco, and the like. A few friends showed up, and that day I got a ride in an AcroSport bipe, and later in the evening, finally, in the Charger.

Oh man. I flew a couple sport biplanes before; and while I liked them, they were too much for this lazy guy. Just a bit too twitchy and too sensitive.

This plane? It flew just like a Grumman. Perfect control harmony. Perfect, light forces on both elevator and ailerons. It fit like a glove.

Then, that night, by the way, I started seriously reconsidering building a Skybolt (BTW, this site was started as a Builder's Log for a Skybolt). I flew one, and while I still liked the plane, I liked the Charger even more.

Especially with it's more "classic" looks (and come on, admit it, we pick biplanes for looks), and it's perfect flyability.

And later that year, Glenn told me he's thinking about selling it. He got too much stuff on his hands, and didn't want to neglect the Grand Champion.

I thought for about a day. I loved my Cheetah, and I loved the fact that it was a "normal" airplane. I could take my 2 year old son up in it. Not in a biplane. I could take "normal" people up in a Cheetah. Not in an open cockpit biplane - at least, it's a bit more.. rough, shall we say?

But I couldn't let the plane I loved just be sold on the Barnstormers; so the next day I told Glenn I'll take care of her when the time comes. I was overwhelmed, and honored to have a chance of taking care of a piece of aviating and homebuilding history. 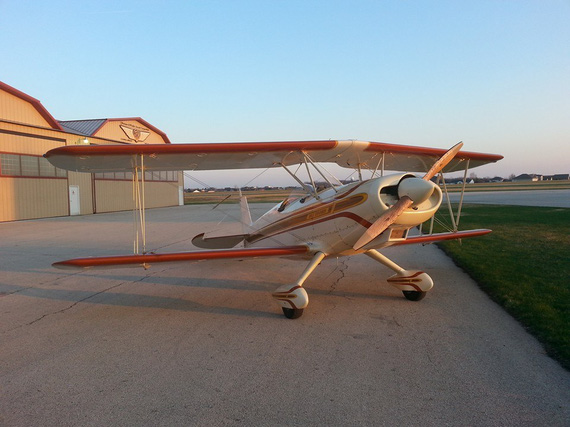 She was built in 1982. From what I could gather, she was started in 1977. There were two guys who built two MA5 Chargers in a chickenhouse in Petaluma, CA. Glenn's plane was built by Remo Galeazzi, and won the Golden Lindy in 1987. The other Charger won too by the way, some years earlier :).

Remo wrote a really nice article for Sport Aviation about both planes.

Here's another article about the plane.

Glenn changed it a bit, adding the smoke system, changing the prop to wood, and tweaking the induction and fuel systems. But the plane stayed all original mostly - original engine, original fabric, and such.

Oh, and it's the Charger on Wikipedia :)!

I told Glenn to give me 6 months heads up, so that I could work out the logistics.

See, I have lots of hours to be very comfy flying any common tricycle single. I didn't have enough experience to haul a taildragger bipe across the country (Glenn moved to CA by then). I would have to learn how to fly it comfortably before embarking on the trip; and figure out the logistics.

But then, things went much faster than I thought.

At Oshkosh 2018, Glenn was telling me he's about to sell the plane. I realized I didn't have time to train enough, and that it would be better to train in the Charger from the getgo. So the working plan became me renting a large-ish truck, and hauling the airplane over to Texas with wings off.

And then, Glenn offered to fly the plane over himself, as a good bye to her. I couldn't refuse.

September 2018, Glenn told me he's gonna fly the plane over soon. I put the Cheetah up for sale, and said my last goodbyes to her November 21, 2018. Then, life and weather intervened, and we couldn't set the trip up till last weekend.

'It's warming up', Glenn texted me a week and a half ago.

A week after that text, he was wheels up en route to TX, with Judi in the front hole.

That didn't last long. An hour and change later, Glenn was stuck in Bakersfield, just at the southern tip of Central Valley, CA. All mountain passes were blocked by low ceilings...

What's funny was that I was flying.. strike that, being flown from San Jose to Los Angeles, continuing to Texas, the same day Glenn and Judi were stuck at Bakersfield. I saw the damn clouds blocking the passes. They were maybe a mile wide!!!

This delayed them by about 24 hours, but the rest of the trip was fairly smooth. They did a lot of flying after being stuck in Bakersfield for practically a whole day, and some hours the following day. 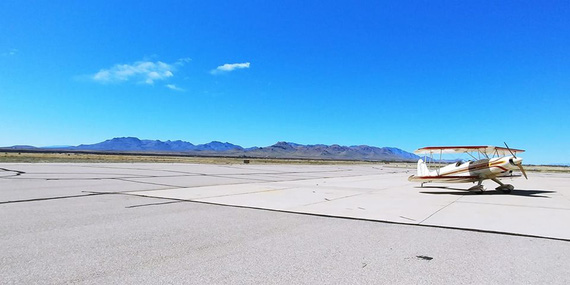 Somewhere in the desert...

Saturday, March 23, at around 10:30 AM Central, they touched down at my home field. We had very little time - their flight back home was in a few hours. Glenn walked me thru the basics. We tucked the airplane away. 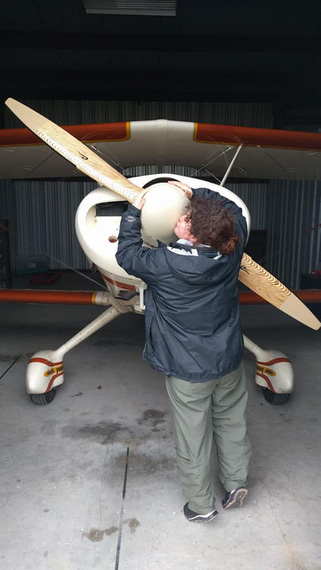 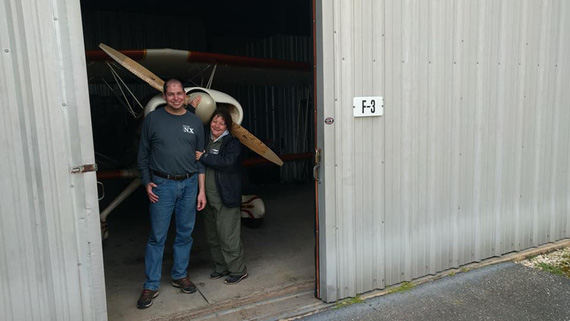 Quick lunch, and on the way to the airport with the big planes we went. A few hours later, late at night, Glenn and Judi were back home.

It was all so fast, I was in the state of... denial? and disbelief? I started becoming overwhelmed when I got back home in the evening on that day, and opened up the logbooks.

The letter from Remo to Glenn, with a bunch of pictures - just pictures of this Charger being built; mundane almost; but a part of the Champion's history.

I ended up writing this into my logbook: 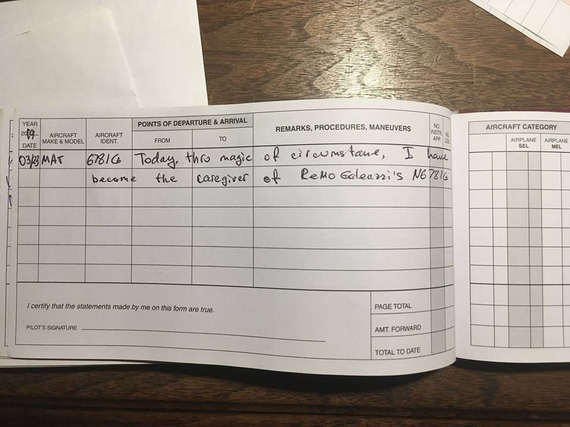 I now am a caregiver of a piece of aviation, homebuilding, and EAA's history.

And, I am no longer planeless! She needs a bit of cleaning and a touch of TLC, and to learning how to fly her we go! 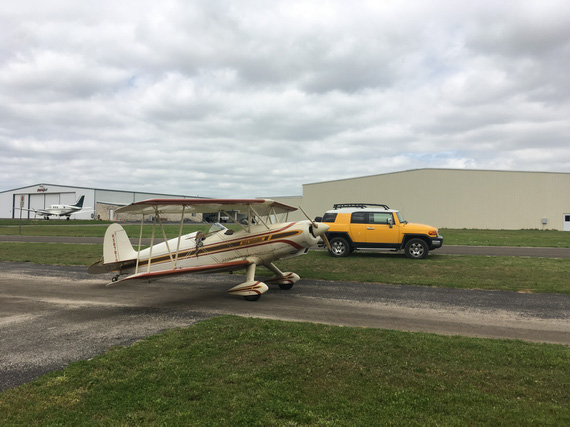 "Approach, what's the tower?"
"That's a big tall building with glass all around it, but that's not important right now."
-ORD ATC