About a week after engine start (yep, I took a break), back at the airport, and looking over the motor again, trying to figure out what the hell was that electrical type smell...

You see, I hung the exhaust with copious amounts of anti-seize. I do have either a Grumman or a Cessna style exhaust, with 4 "stubs" (aka risers) coming off of the motor, and a "spider" looking setup hooking to them, joining all cylinders into a muffler under the front of the motor.

Risers go inside the main exhaust, and are held by clamps, engaging "beads" on the pipes.

So I thought, I'd hang the whole thing "loosely", so that individual cylinders will move, and use high-temp anti-seize to make sure it, well, doesn't seize up.

The working theory was that that anti-seize was "cooking" and produced a smell. I saw a lot of it blown out from around the clamps.

Another working theory was that maybe there was an insect or few stuck around the baffles or cylinders somewhere. There was one big wasp in there that I saw after the engine start - and smoldering insect carcasses sometimes smells just like burning wiring.

I know that last bit, because I spent insane amount of time, and got aggravated to no end, when I got this weird electrical burning smell in my old house. I was convinced I hit a wire when hanging some stuff to the studs just a few days before, and I literally drilled holes along every place where I hung things with a hole saw to make sure there were no wires.

There was one, but it wasn't pinched or damaged.

And all that was finally traced to a roach that died inside my air conditioner heat exchanger, right on a heat strip - heating season just started, the roach was dead and smoldering, and the AC was blowing that lovely smell all over the house. I later read a lot of fire department stories about similar situations of people freaking out and thinking their houses were on fire.

At any rate. My theory was either the wasp, or the anti-seize.

And my anti-seize blew out of the joints real well (ha!) - sooo.. I guess, the loose hanging exhaust idea was a no go. 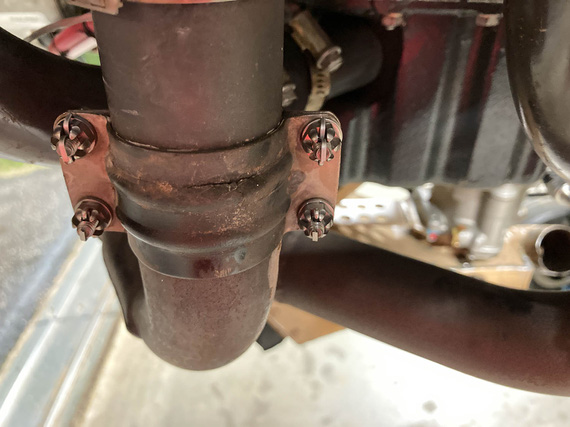 So the exhaust was taken off, again.

After quite some researching, here's what I found.

Those clamps are ubiquitous Cessna clamps. Part number irrelevant - because... 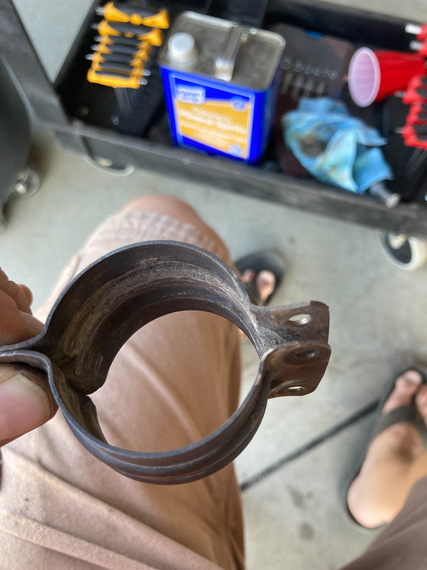 I was convinced I had a Grumman exhaust, because hey, what'd you take: a Cessna or a Grumman? :)

Those clamps are impossible to make to not leak. Forums confirmed by the way. Mr. John F. confirmed, too. Just think about them for a second - they will leak.

Grumman clamps are a bit different - they have this "liner" that is supposed to act as a gasket. 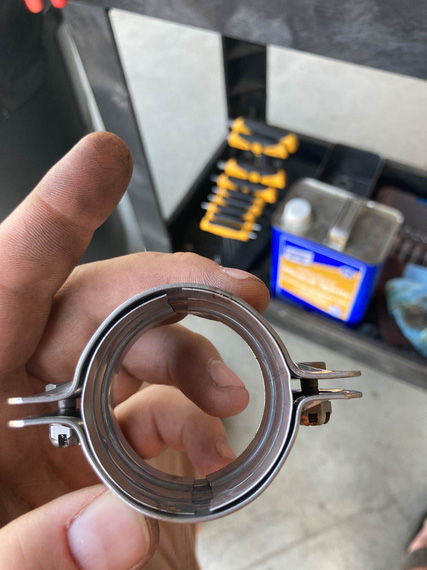 Yep, you guessed. I went Grumman. I don't have any Cessna friends. I have a ton of Grumman friends. You know where my heart lies.

Grumman book does not state anything about hanging the exhaust "loosely". It states to use Walker AcoustiSeal <part number here that doesn't exist anymore> (of course).

Mr. David Fletcher of Fletchair by the way confirmed that the exhaust needs to be tightened down, and that it's not a usual problem with it cracking due to differential movement of cylinder heads. Or rather, of course it will crack. But not all the time - it's perfectly fine.

We spent quite some time with Ben, figuring out the clamps (I was initially reluctant to fully close them because of the liner deforming too much), and AcoustiSeal. He helped find a catalogue AcoustiSeal with a different part number - 35959 - that is definitely within the temp range. I decided to use that instead of anti-seize. Researching a bit, it seems to "burn up" and "ash out" forming a fluffy, powdery type seal.

Cleaned every pipe, put on the new clamps with AcoustiSeal, and tightened them down. That was bad. Really bad. Torque was definitely excessive to close them, but I had to close them. It's obvious why, too - the OD of the pipe is 1 3/4; the ID of the clamp is 1 3/4, but the thickness of the steel liner is about 1/64 - so yeah. And my pipes aren't perfectly round, or smooth, either.

But they did close, and they did fine in the end. 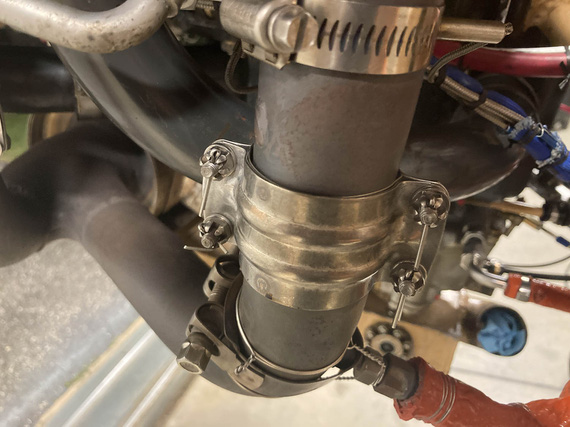 I decided to try them. Worst case, I'd go back to Cessna style.

Also, cleaned up around the smoke oil injectors, and put AcoustiSeal there too. You can see one on the picture above. Re-safetied them a bit better too - the idea Glenn had was that if the main worm clamp failed, the safety wire will at least hold them in place.

And then, the other question came up that we spent quite a bit of time arguing over with Ben.

What's the torque on the Lycoming exhaust nuts?

A lot of folks on the internet use the "default" - 204-228. A few were told to do so by Lycoming. When I torqued them, it felt... somewhat excessive, given that there's a gasket in play there too. There's no straight answer, really.

I settled on 180. Why? Grumman's book assumes "beaded" - not "no-blow" - gaskets. 180 is much closer to 204. 12% difference - within margin of error of a crappy typical torque wrench. And if mine is reading "high", I'll still be in the range listed for geared and vertical motors - which have the same cylinders as far as I know.

Anyway, second run yielded a very different smell - this time, of the regular "burning oil" sensation (which is typical for a motor that slowly weeps oil and throws it everywhere when shaking - that's the built in feature of spray lubrication and corrosion protection of your motor compartment! What? You weren't aware of that?!).

Much better. No blowouts of sealant anymore. No exhaust leaks I could discern.

... and, an oily fitting that I thought was oily after the first run because we used it to pour oil into the oil pump - but no, I confirmed a hose leak around the fitting of the only two hoses (oil cooler supply and return) I did not change.