Finally, doing some actual work on the airplane, and having fun! And I decided to start logging time.. because, why not!

I like marked wires. I used to be a networking guy, and I was very meticulous about marking every single wire in my cabinets, so that I knew exactly what was plugged in where.

It took a bit of upfront time, but saved a bunch of it later on.

So naturally, I was planning to do the same on the Charger, and, more importantly, make it look professional.

Thanks to living in this day and age, that is simple. No, I'm not gonna pay someone to laser etch my wires - that's a cop out :). It's like paying someone to paint your plane.

Instead, I have researched and found a perfect label maker - Brady BMP21 (not including a link here because it will probably go dead after some time... just search for it). This thing has 3:1 heatshrink tube cartridges. 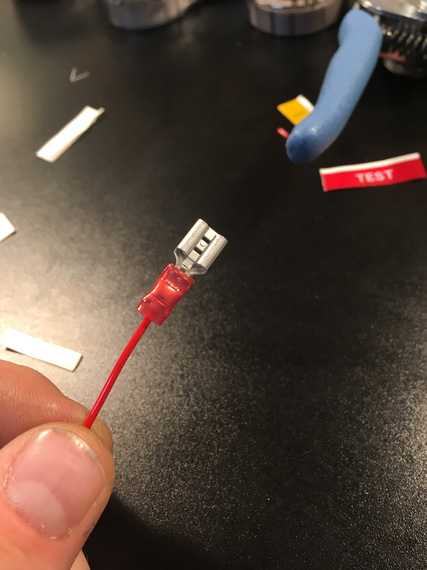 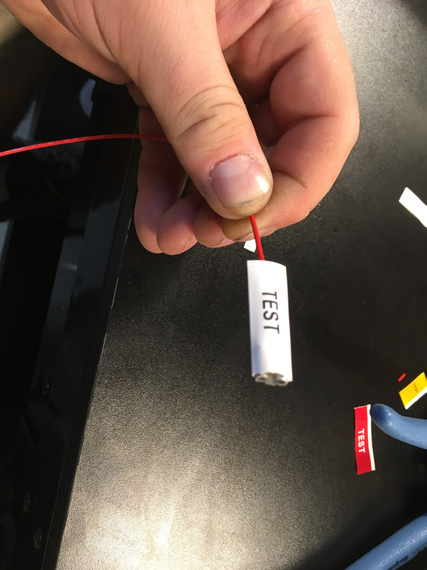 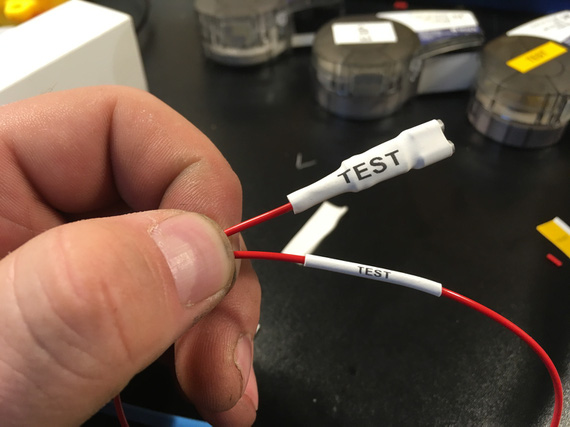 Every wire must be fused at the source. Well, almost every :). We don't fuse a couple wires like battery - master contactor: but this is an exception rather than the rule.

Most wires are fused on the fuse block at the main buss. But some wires are impractical or impossible to have hooked up to that. Think ammeter shunt wires as a classic example.

For those, most people use bulky, ugly, and generally eww-y inline fuses. But there's a better option! Enter fusible links.

So, I wanted to convince myself that that will work fine for me.

Initially, me and my ham neighbor tried to use his ~30 amp power supply to do it. No joy. The best we could do is 22 amps, and (imagine that!) 24 gauge we were trying to burn held up to the abuse with no sweat at all! I could even hold it in my fingers. Yay, milspec wire!

So I decided to go rough. I do have a discarded old battery, after all. It was time to burn some wires with it.

Here, the red wire is 20AWG, and the black wire is 24AWG. Using crimps for quick setup. 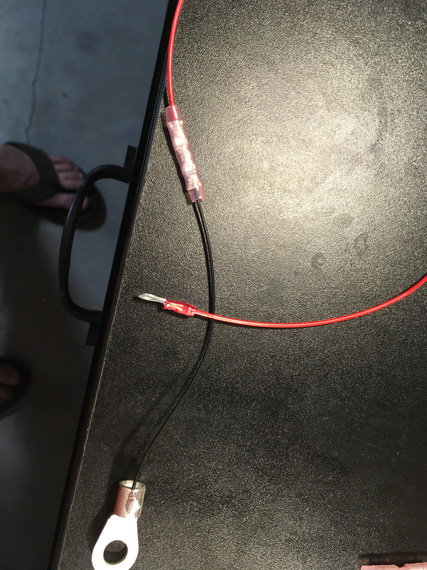 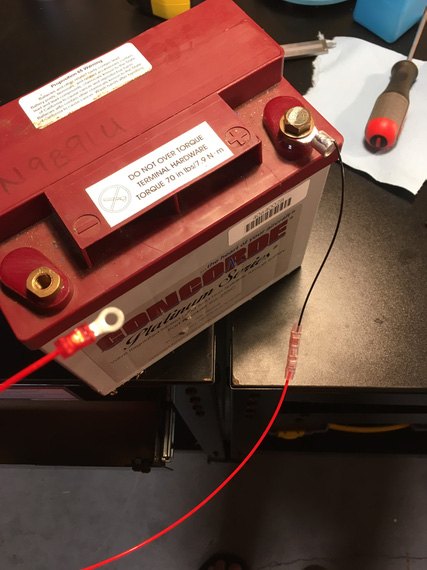 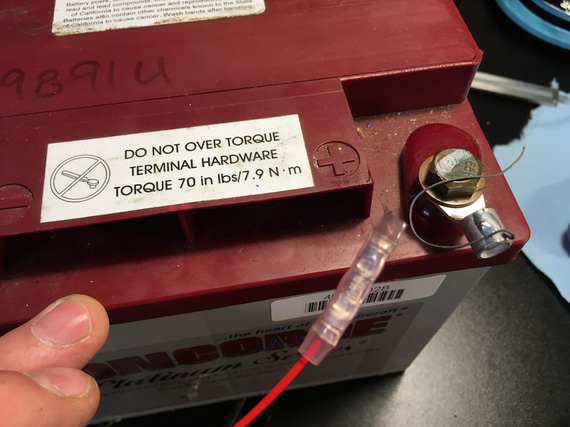 It burnt real quick, in less than a second, and the protected (red) wire barely got hot (I was holding it - that was a part of the test). Yes, say that I am unscientific all you want - milspec wire holds up to 150C, and I can't hold up to 150C. The 20GA wire got barely warm - which means it won't cause any problems in a bundle.

Now, it was time to set up a real one - to make sure that when the "fuse" wire burns, it doesn't damage anything.

I also soldered the fuselink in this time - I wanted to see how well will the solder splices hold to the temps. 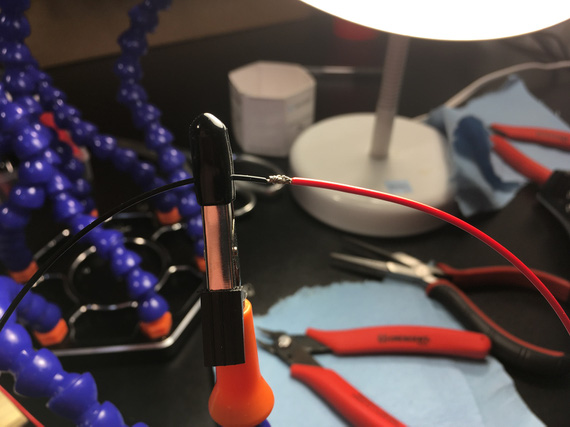 Soon to be splice 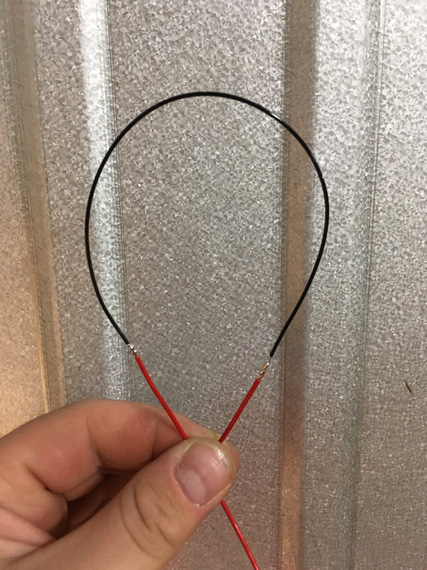 Note here: I know that in reality, the thin 24AWG wire will be the first in chain; here I'm just splicing it in the middle of 20AWG segment so that I can cover both ends. In "production" fuse links, the "source" end will be a ring terminal, and the fiberglass sleeve will go over it. 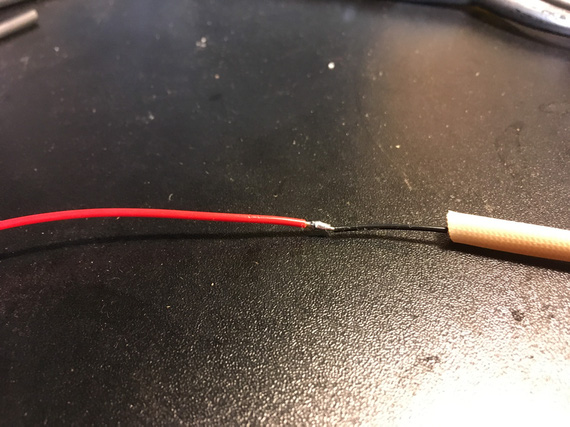 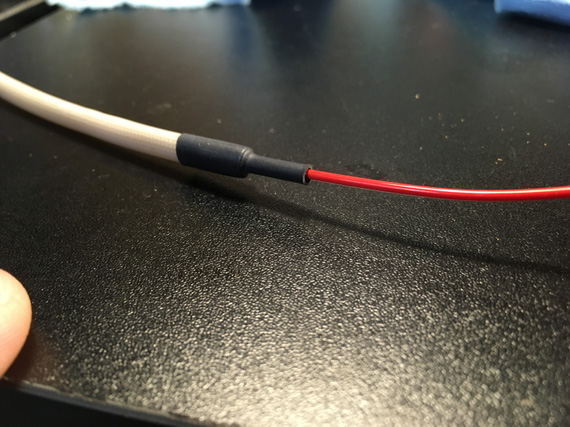 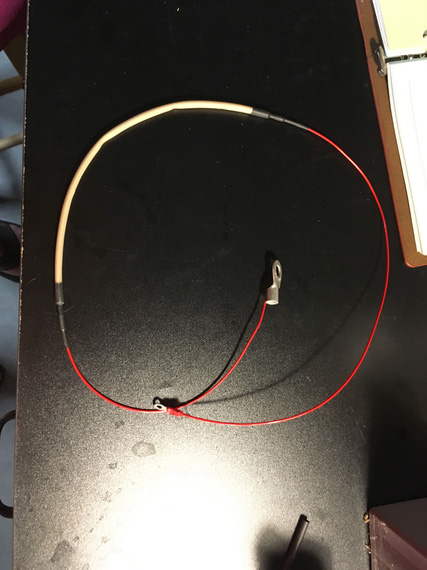 Boom! Or not? I thought it didn't work, frankly. I didn't hear anything. I didn't smell anything. I actually took my multimeter to make sure the continuity wasn't there - it wasn't!!! Wow. The fiberglass sleeve contained the micro-explosion really well.

I took it off to inspect. 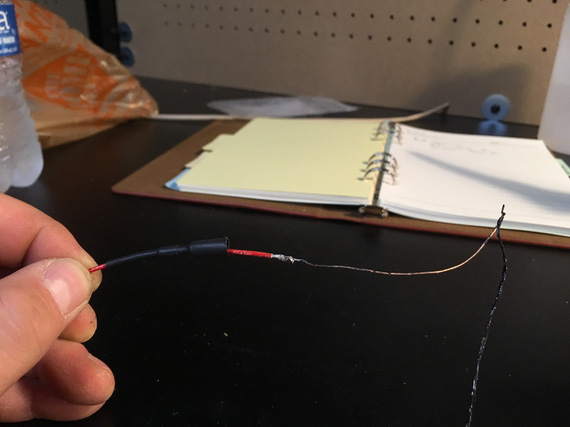 All burnt up wire

The fiberglass sleeve showed no signs of damage.

I will need to play with different sizes of heatshrink and probably will use the glue lined strain relief kind just to support everything well, but hey - this worked very well indeed!

Prior to ripping the old wiring out, I wanted to take some real life load measurements with various things turned on, so that I don't get any nasty surprises.

But this plane has no ammeter... damn. I searched around, and found this little doodad: 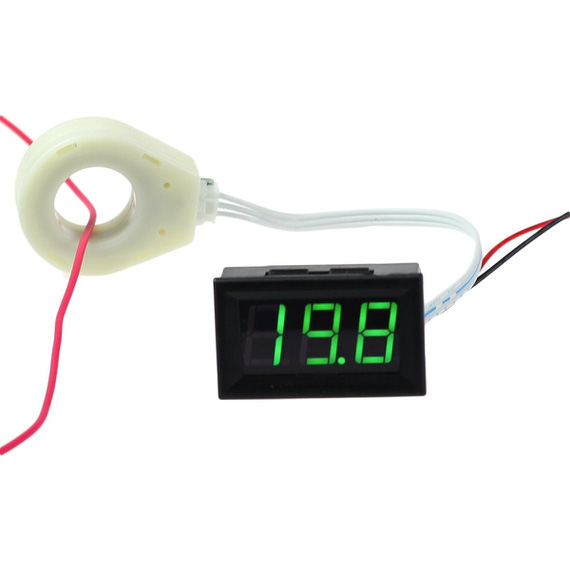 Very nice. It basically measures current on the wire passing thru this big white ring using Hall effect. Very cool! No need to splice into the battery leads and install a temp shunt.

So, I rigged it up and took some numbers. 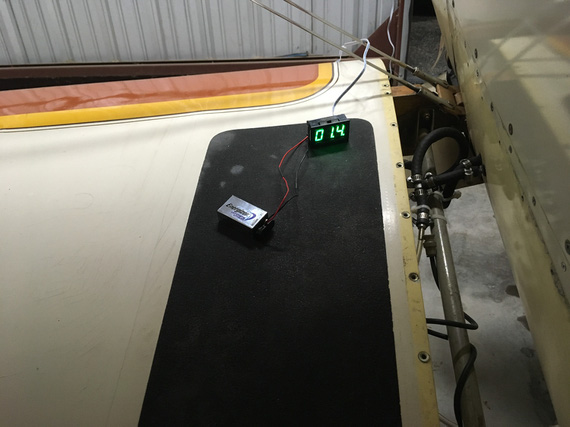 So couple interesting things here. I think the x-der number is too low, but it wasn't being interrogated, and I can't make it be interrogated without flying the plane or using a transponder tester which I don't have. Also, Master On is too high seemingly... Will need to double check later and isolate things (master solenoid, hobbs, voltmeter, voltage regulator, fuel gauge) if I care enough - I don't think I do. Also, fuel pump is too low seemingly. Need to double-check the spec.

And then, I could not turn on the Turn-Slip Indicator...

Sad, sad indicator... see, it's long. And it's wire connector is sticking out. And it's right behind the front seat's headrest, and there's just not enough room for it, and the connector.

So whomever put it in... did this: 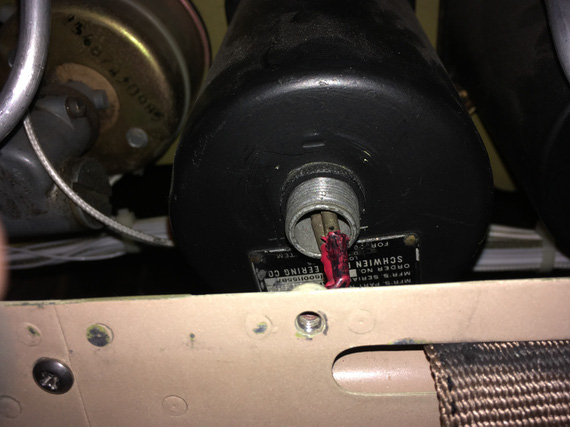 It's hard to see; but basically, those wires are bent "down" at a very sharp 90 degrees angle. Notice how he just used pins without the actual connector. The distance between them is tiny! I am surprised they haven't shorted over all these years. I really am.

Initially, I thought the gauge didn't turn on because that wiring was all bust up, so to test it, I decided to pull it out. 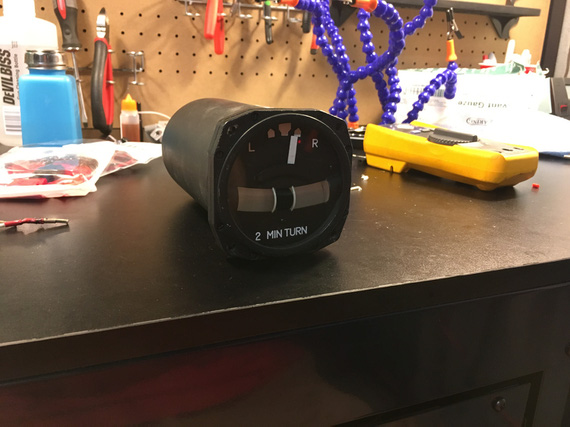 I cut off the wires with those pins on them to hook it up to my testing battery... hmm.. but I needed some leads! Well, I was gonna make a bunch of various test leads - so this is as good a time as any! Man, I love soldering...

I long decided to make a bunch of leads with "passthru" banana plugs on one end, and something (a crocodile clamp, a battery clamp, a ring terminal) on the other. This way, I could mix and match, and plug them into my multimeter; daisy chain, and have multiples depending on what and how I needed to hook up. I had all the bits (clamps, crocodiles, banana plugs), and even got a roll of very nice super flexible silicone coated probe wire. 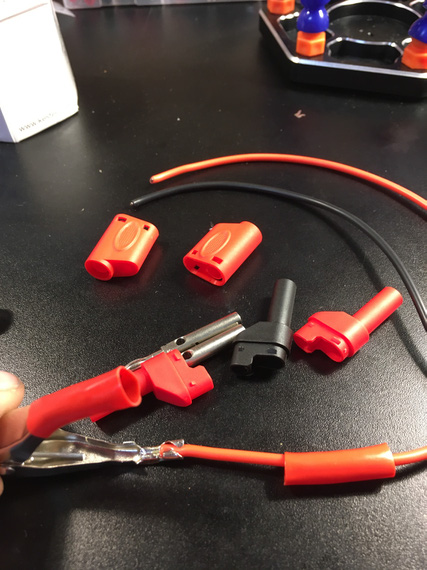 Components, and the battery clamp crimped on 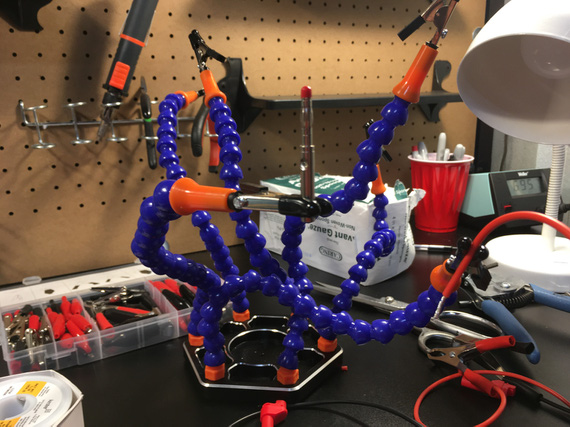 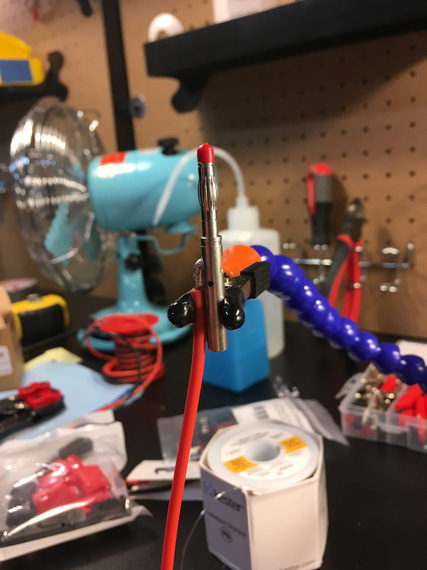 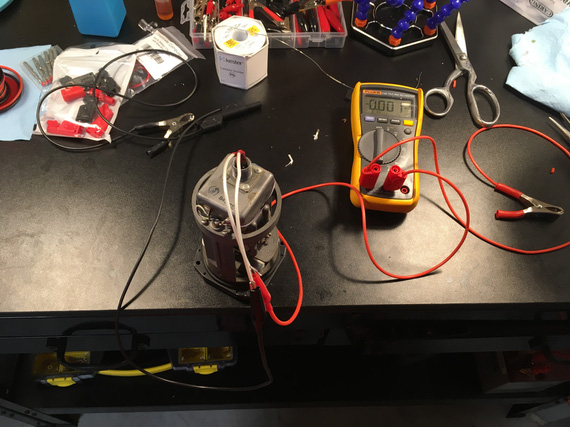 The gyro in the gauge didn't start. Damn.

But I had resistance between + and -. And I had voltage! Hmmm..

Second time I hooked it up, I saw a bit of a spark when I put the positive clamp to the battery, and heard something.

Well, well. So that gyro "froze" in a bit... Yep, it was hard to turn over with a finger - no doubt a small motor in there had a hard time!

I probably "cleared it up" a bit when turning it over with my fingers - but that won't last long... damn.

Are we looking at the overhaul for this thing too now? Sigh.... Maybe I can find parts to do that myself, but not so sure about that.... It's not common for owners to overhaul their instruments - they're precision clockwork, after all...

And I will have to figure out how to solve that wiring problem with no space to hook up the right type connector. I am thinking along the lines of maybe routing a wire from inside of the gauge down thru a hole I'd drill, a grommet it it, and covering the whole business with with some sealant or something, so that the dust doesn't get in. we'll see. Need to ponder this a bit more.

... and here's what happens to airplanes that aren't flown enough... 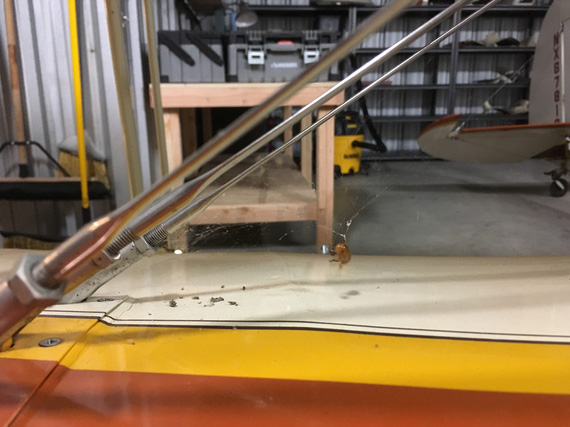 "Request Runway 27 Right."
"Unable."
"Approach, do you know the wind at six thousand is 270 at fifty?"
"Yeah, I do, and if we could jack the airport up to fifty-five hundred you could have that runway. Expect 14 Right."
-ORD ATC